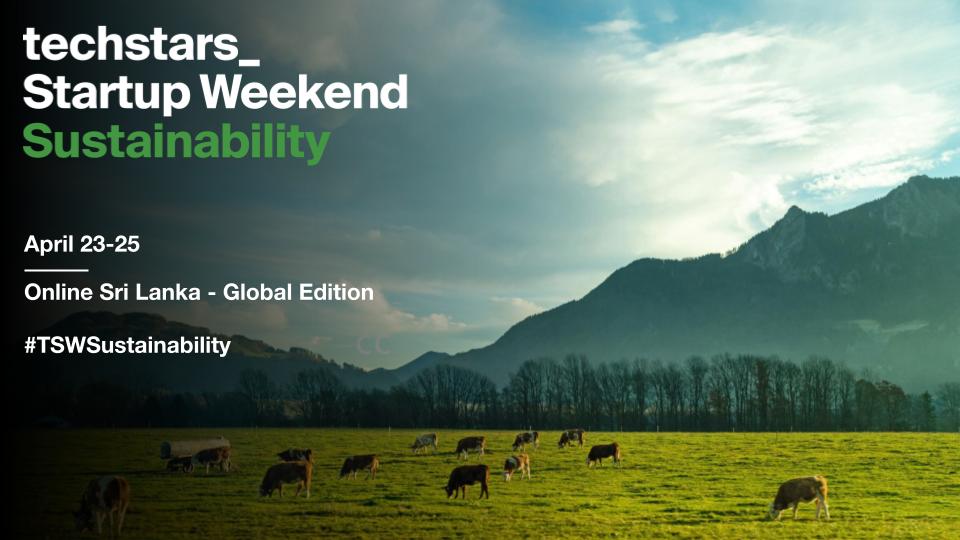 April 28, 2021 by Dimithri Wijesinghe No Comments

Startup Weekend Sri Lanka is a 54-hour event that brings together Sri Lankan start-up entrepreneurs including designers, developers, tech personnel, and experts from all industries to realise their potential. Much like its global counterpart, Startup Weekend, which is a global network bringing together entrepreneurs, follows the same basic model: Anyone is welcome to pitch their start-up idea and receive feedback from their peers. Teams that formed the top ideas (as determined by popular vote) embark on a three-day journey of business model creation, coding, designing, and market validation. The weekend culminates with presentations in front of local entrepreneurial leaders with another opportunity for critical feedback.


Startup Weekend Sri Lanka Facilitator and Community Leader Sharanyan Sharma commented that when he first conceptualised the idea to introduce this concept in Sri Lanka back in 2017, he was told that Sri Lanka was in fact not yet ready for this type of programme and did not have the landscape for it. However, despite the initial pushback, he was able to bring down this global event courtesy of “Techstars”, a capital market company that is the global platform for investment and innovation, connecting entrepreneurs, investors, and corporations.


He said that they held the first-ever programme in Jaffna, and shared that as they have continued to introduce the programme in individual cities around the island, they’ve made note of making the programme non-discriminatory towards just about any facet of life, making sure to hold no barriers for taking part. However, there is one requirement everyone must share, including their facilitators and judges, and that is that they must come from an entrepreneurial background and not represent corporate industries. The first event saw 260 participants and the event was carried out with a Rs. 3 million budget and since then, they’ve conducted nearly 28 Startup Weekends.


As for the programme model, usually an onsite three-day programme where the individual participants, who get separated into about 12 groups of five to seven members, will be appointed mentors who will guide them through the process of developing their idea. Sharma shared that the ideas need only be fleshed out to a certain extent and there need not be a physical product to show at the end. However, what is an absolute must is the market validation, which is a compulsory element that teams must produce. Finally, once each team presents their idea to the judges, the winners will be selected, who will then be awarded multiple perks including a Rs. 500,000 cash prize. The winning team will also be given the opportunity to take part in the five-day boot camp held as a part of the global Startup Weekend, which will be an all-expense paid trip to the country where the programme is held, and they will have the chance to rub elbows with entrepreneurs from around the world representing diverse industries.


In 2021, however, much like last year, the event was held online, and Sharma shared that there are some challenges that come with online events; one notable element being that participants and even facilitators are often distracted, which is only natural when you are unable to entirely separate your home and work life. Despite this, he shared that this year’s programme came to a successful close on 25 April.


Sharma shared that even if you are not part of the winning team, Startup Weekend allows you far greater opportunities along the way, stating that often in the past events he has noticed that while the first three winners are awarded the cash price and numerous other perks, the other teams are the ones who have gone on to continue to grow in the market. He said that the support and networking opportunities you gain as a part of the event allow you to really create a tangible outcome to your idea and if you have the passion, drive, and team spirit, even if you don’t win, you can go on to have a sustainable start-up that furthers your career.

February 17, 2019 bythemorninglk No Comments
Here are five reasons why North Gate by Jetwing makes you feel like making Jaffna your home.

June 11, 2021 byNews Admin No Comments
Ruwantha Dhananjaya is just 21 years old, and yet he has done more travelling than most of us I’m sure. After the first lockdown, Ruwantha seized the opportunity, when tourism was non-existent and hot