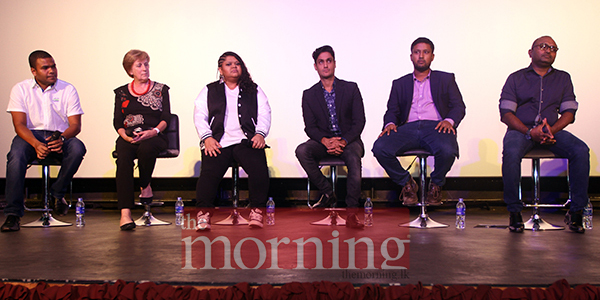 September 10, 2018 by Jennifer Anandanayagam No Comments

Coinciding with World Suicide Prevention Day which falls today (September 10), the video was created in an effort to spread awareness and create impactful conversations around the issue.

World Health Organisation (WHO) statistics has Sri Lanka at the highest Suicide Mortality Ratio in the South-East Asia Region, while the country is listed as having the fourth highest suicide rate in the world.

The music video titled ‘Hitha Danne Mithuranne’ featuring collaborations with popular singer and rapper Randhir and Drill Team was carried out in partnership with Mobitel and The British Council.

The British Council, as UK’s international organisation for cultural relations and educational opportunities has awarded one of eight grants to Ashanthi’s music video as a part of their Voices and Choices grant scheme which is inclusive of over 100 countries.

Speaking about her motivation to tackle this particular issue, Ashanthi said, “I was part of an effort called ‘Women of the World’ with British Council which shed a lot of light for me on issues that women experience in the world,” pointing out that while the suicide rate of men is higher than of women, the attempted suicide rate of women is even higher.

Counselling psychologist, Nivendra Uduman, addressing the audience, shed some light on the topic, “It’s a national health crisis, affecting any and all regardless of their status or background.”

“Most people do not attempt suicide because they wish to die; it’s far more complicated than that,” further providing that suicidal thoughts need not always stem from a mental illness, and that it could be a result of varying factors; loneliness, grief, shame.

Sri Lankan youth are particularly susceptible, as we as a society, suppress our issues and do not speak openly about important matters like sex, and sexual urges, which then manifest in a naive youth’s mind as something unbearable and shameful, often leading to extreme ends.

In my pain, I felt that there was only one solution:  Amaya Suriyapperuma

Amaya Suriyapperuma, Sri Lanka’s very own ‘Wonder Woman’ shared her own personal struggle with depression and suicide; how she lost her father two years prior, to cancer which left her devastated and unable to deal with her grief.

“I didn’t feel like I could burden my family and my friends have always believed me to be a strong girl and I wanted to maintain that; and in my pain, I felt that there was only one solution.”

However, she somehow overcame her struggles by seeking out professional help and has understood that acknowledging your problems is the way to move forward.

Featured artiste Randhir spoke of this collaborative project stating that “suicide is an uncomfortable topic, and culturally, we suppress such things and the whole purpose here is to start a conversation, to get people talking.”

He also stated that he hopes that this serves as a catalyst to further the conversation and hopefully raise awareness.

The music video itself was pleasant and commercially viable. Set to a catchy tune, it depicts relatable occasions where one might be vulnerable to suicidal tendencies. It is a somewhat familiar portrayal of a complex issue, with enough of a marketable flair to be widely accepted. While we could critique the product for a lack of nuanced vision, it is understood that we will only defeat its more virtuous purpose.

Sri Lanka is currently grappling with this most devastating national health crisis, rampant due to intrinsic values our culture refuses to part with. One could only hope that the conversation that has begun will continue in order to effectively remedy the current plight gripping our nation.

Do you feel like you need to talk to someone? You are definitely not alone. Here are some hotline numbers dedicated towards providing support and assistance to those in need of urgent intervention.

December 13, 2020 byJennifer Anandanayagam No Comments
A recent social media advert (20 November 2020) put out by a leading dishwash brand in Sri Lanka with the tagline that was asking mothers to teach their children the proper way to wash dishes, caused

January 29, 2019 bythemorninglk No Comments
When we were on Galle Road passing Bambalapitiya, we noticed this burger joint which is always crowded during the evening.