Where are the national cricket selectors? 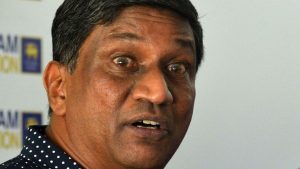 Former National Cricket Selection Committee, headed by Ashantha de Mel, was dissolved in late January and SL is still without an official selection panel for over two and half months

Sri Lanka has now become probably the only country in the world which is involved in international cricket for almost two and half months without the national cricket selection committee.

The previous selection panel was disbanded after Sri Lanka’s second and final Test against England in Galle on 25 January. Its Head Ashantha de Mel resigned following the 2-0 whitewash in that series which followed the 2-0 loss, another whitewash, in South Africa.

“It’s a chaotic situation. The officials who are in the centre of the decision-making process have their vested interests on the matter. They want to force their favourites into the new panel. But the officials above them are not allowing that to happen. This is the main reason for the delay,” said a highly-placed source on national sports selection to the Morning Sports yesterday (5).

After the England Tests, Sri Lanka played an all-format series in the West Indies. Pramodya Wickramasinghe and Chaminda Mendis reportedly did the selections during the series with the former being the on-tour selector.

Pathum Nissanaka and Ashen Bandara were given international debut during the series and there was notable performance from Nissanka, especially in the Tests, which cemented his place in the final XI.

Yet in two weeks, on 21 April, Sri Lanka will start another two-match Test series against Bangladesh in Kandy. After Bangladesh, they will be involved in a busy schedule of series, in fact one after another, in a year packed with both originally scheduled matches as well as assignments that were postponed from last year due to the pandemic. There is a T20 World Cup coming up in October as well.

“Sri Lanka Cricket (SLC) has given a set of names and the National Sports Council wants their favourites in, probably to make advantage for the clubs they represent. The others won’t allow that to happen because it is not in the interest of the country,” the above source added.

“This is the main reason for the present deadlock. Even the Sports Minister can’t help this situation. But at the end of the day, it won’t reflect well on him altogether,” he further added.

Mahela Jayawardene and Kumar Sangakkara are the cricket-related officials of the NSC, appointed by Sport Mister Namal Rajapaksa last August. The NSC is headed by Gen. Shavendra Silva.

It was only last December that SLC announced the national cricket selectors, that time too after a long wait.

De Mel headed the previous committee (before December) as well whilst Mendis too was one of its members. The third member of the previous panel, Vinothen John, was omitted. The same panel announced in December was to make selections for Sri Lanka women’s as well as the Under-19 cricket.

“Now the NSC members are already in India for their IPL (Indian Premier League) commitments. It is really good if we can get the names finalised even before the Bangladesh series,” the above source further stressed.

Where are the national cricket selectors?