October 8, 2019 by The Sunday Morning No Comments 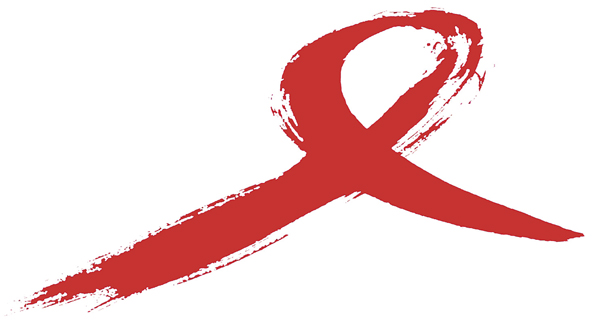 The World Health Organisation (WHO) is currently evaluating Sri Lanka’s achievements in order to declare it a country that has successfully eliminated mother-to-child transmission of HIV. Mother-to-child transmission of HIV is the spread of the human immunodeficiency virus (HIV) from a woman living with HIV to her child during pregnancy, childbirth, or breastfeeding. Sri Lanka launched a national endeavour to eliminate this transmission in 2013 and over 95% of pregnant women have been tested for both HIV and syphilis by 2017. According to official statistics, Sri Lanka currently has around 3,500 HIV patients and less than 100 child HIV patients with the goal of ending AIDS by 2030. To gain more insight into the process and implementation of the national strategy, we spoke to Consultant Venereologist and National STD/AIDS Control Programme Coordinator – Strategic Information Dr. Ariyaratne Manathung.

The National STD/AIDS Control Programme (NSACP) of the Ministry of Health is the main government organisation which co-ordinates the national response to sexually transmitted infections including HIV/AIDS in Sri Lanka. It collaborates with many national and international organisations such as the Global Fund to Fight Against AIDS, Tuberculosis, and Malaria (GFATM) and UN organisations while providing leadership and technical support to 34 islandwide STD clinics and 23 ART (Antiretroviral Therapy) centres. 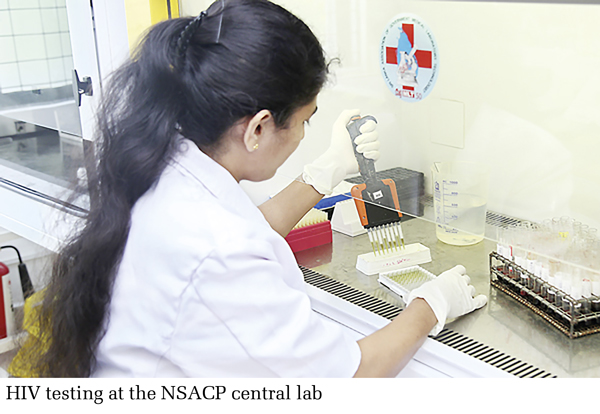 Mother-to-child transmission (MTCT) is the main mode of HIV transmission in children under 15 years old. HIV can be transmitted from a HIV-positive mother to her child during pregnancy, labour, delivery, or breastfeeding. In the absence of any intervention, transmission rates range from 15% to 45%. This rate can be reduced to below 2% with effective interventions during the periods of pregnancy, labour, delivery, and breastfeeding. These interventions primarily involve antiretroviral treatment for the mother and a short course of antiretroviral drugs for the baby. They also include measures to prevent HIV acquisition in the pregnant woman and appropriate breastfeeding practices.

What does the term ‘elimination’ mean for EMTCT validation process?

Typically, when a disease or an infection incidence falls to zero within a geographical area, it is considered “eliminated”. However, currently, the minimum EMTCT impact targets as outlined by the WHO are:

Additionally, to accomplish EMTCT of HIV and syphilis, there are five process targets that need to be met: 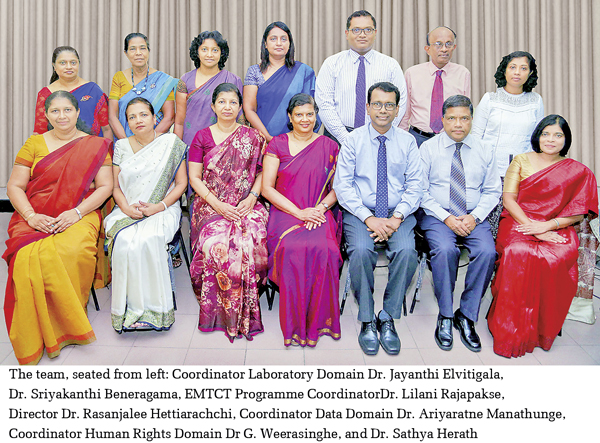 Dr. Ariyaratne stated that necessary targets have been achieved as given by WHO for the year 2017 and 2018. However, this must be validated by the WHO, and the certification as a country which has eliminated mother-to-child transmission of HIV and syphilis is only given if we succeed in this validation process.

What is the Government doing?

The main financial contributor to the National STD/AIDS Control Programme of the Ministry of Health is the Government. It spearheads the national response to HIV epidemics in Sri Lanka. Maternal and child health services are also provided mainly by the government health budget. According to the last Demographic and Health Survey (DHS), only around 5% of total deliveries take place in the private sector. Hence, the contribution by the government sector is paramount in achieving this milestone.

Dr. Ariyaratne said that the country has made good progress in eliminating mother-to-child transmission of HIV and he is certain that we will soon be declared a country which has eliminated mother-to-child transmission of HIV and syphilis. The use of ARV prophylaxis by the mother during pregnancy and the breastfeeding period, and use of infant ARV prophylaxis together with HIV testing and counselling programmes for women and their partner, enhanced at antenatal, labour, delivery, and postnatal settings have contributed to this magnanimous achievement.

Place your order for the good time burger

May 2, 2021 byNews Admin No Comments
Sugar Burger is making its comeback in a big way. A veteran in the Colombo burger scene, Sugar Burger was once synonymous with a good time, and they have recently introduced a brand new menu with 10 n