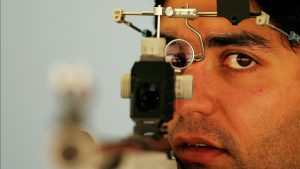 India’s only individual Olympic gold medallist Abhinav Bindra who says if he were the BCCI President, he would have definitely given a large amount of money to the vaccination programme in the country

After the tournament’s first 20 matches were held in both Chennai and Mumbai, the Indian Premier League (IPL) moves to Ahmedabad and Delhi for the next leg of the competition this week.

Yesterday’s (26) 21st game of the league was held in Ahmedabad between Punjab Kings and Kolkata Knight Riders.

The tournament’s Delhi opener will be played tomorrow (28) between Chennai Super Kings and Sunrisers Hyderabad. There will be a total number of eight games fixed for Delhi’s Arun Jaitely Stadium, between 28 April and 8 May.

Now this is the kind of news that was out from Delhi yesterday:
“Police vehicles are deployed to escort oxygen tankers to Delhi hospitals as India’s healthcare system collapses tragically under stress,” reported Al Jazeera yesterday.

“The life-saving gas is the most desperately-needed commodity in the country. Hospital directors in the capital are saying they are managing hour to hour waiting for supply,” the report further added.

Hospitals shut their doors for patients 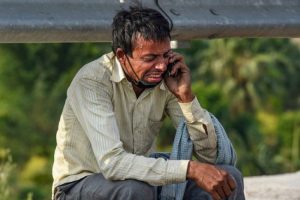 A migrant worker in Delhi calls home in Bihar where his son is said to be critically ill. This could be one of the most ardent cricket fans of the Dhonis, Kohlis, and Sharmas

Staff in one hospital said 20 critically ill patients died because the oxygen delivery was seven hours late on Saturday (24). Another had to discharge all of its patients after it ran out of its oxygen supply and finding a hospital bed for a fee is almost impossible in the city, added the Al Jazeera news report.

“I came here to get my grandfather treated. He is suffering from Covid-19. They are not letting us in. We don’t understand anything. The security guard is saying there is no doctor available here. If there is no doctor in the emergency ward, then where will we go? His oxygen level is dropping alarmingly,” said one Abhishek, a relative of an elderly Covid-19 patient.

India reported more than 300,000 cases for the third consecutive day on Saturday.

“The situation in India is a devastating reminder of what this virus can do. We must marshal every tool against it in a comprehensive and integrated approach,” said Tedros Adhanom Ghebreyesus, the World Health Organisation (WHO) Director General, expressing his concern over the situation in India.

As innocent people are dying on streets as they are unable to get access to oxygen and mass cremations are being held in various parts of the country, the IPL is continuing unabated as if it is something totally detached from the Indian society. Aren’t those who are dying the cricketers beloved fans?

Chris Morris alone, a South African all-rounder, grabbed Indian Rs.16.25 crores in this season’s IPL Auction, when Rajasthan Royals bought him for the highest prize of the competition ever.

The IPL 2020 winners Mumbai Indians received 20 crores while runners-up Delhi Capitals ended up receiving 12.5 crores. The third and fourth placed teams, Sunrisers Hyderabad and Royal Challengers Bangalore receive 8.75 crore each for reaching the play-off round last year when the annual league was moved to UAE due the outbreak of the pandemic.

Meanwhile Abhinav Bindra, India’s only individual Olympic gold medallist who won the gold medal in the 10-meter air rifle event at the 2008 Beijing Olympics becoming the country’s first Olympic gold medal winner since 1980, has said he is extremely disappointed with IPL cricketers as well as the organisers of the tournament, the Board of Control for Cricket in India (BCCI).

Bindra is disappointed with the continuation of the IPL 2021 amid Covid-19 and, according to him, it is disappointing to see cricketers turning a blind eye on India’s staggering pandemic situation at present.

“Cricketers and officials can’t just live in their own bubble and be totally deaf or blind to whatever is going outside. I can only imagine that while you’re having these IPL games, outside the stadium you have ambulances going to hospitals,” Bindra wrote to the Indian Express.

“I don’t know how the coverage on TV is but I would really appreciate it, if it’s a little bit muted in nature. I think celebration and everything around it should be at a minimum because you have to show a little bit of respect to society,” the 38-year-old had added.

“The players should realise just how privileged they are to be able to play the IPL in these times. So I just hope everybody involved in the IPL play their part in one way or the other, either through right messaging – like the importance of masking up, the importance of social distancing – or even finding creative ways to amplify the health requirements of people,” he wrote.

Is it really a distraction?

“If I was the BCCI President and had the capability – and I understand the IPL is not a charity – I would definitely give a large amount to do, say, the vaccination right or help out in any other way. This is one way to acknowledge that to conduct IPL right now is a huge privilege and everyone should act responsibly.”

“The debate (is) whether (the) IPL is inappropriate to continue playing right now or if it serves as a distraction. Personally, I am not able to watch any sport at the moment. Even when I go on Twitter and see some news about the IPL on my timeline, I quickly scroll past it because I am not able to relate to any of it at the moment,” he wrote in a column for the Indian Express.

This is one example for the fact that the 14th edition of the IPL is now under fire for continuing the matches despite the entire country being engulfed in the worst spike of the coronavirus since last March when Covid-19 outbreak began.

US EDGES PAST CHINA IN LAST HOUR

Battle begins for revival and honour