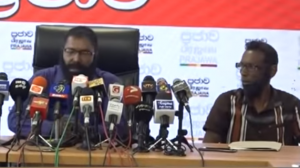 The two individuals who made controversial statements during the ‘white van’ press briefing have been remanded until the 6th of January.

The order was delivered by the Colombo Chief Magistrate Lanka Jayaratne when the case was taken up this morning.

The two individuals appeared during a ‘white van’ press briefing organised by former Minister Rajitha Senaratne in the run up to the presidential elections(10 November).

The two suspects were subsequesntly arrested  later detained. On the 16th of December, the duo was produced before the Colombo Chief Magistrate, who ordered to remand them until today(27).

Only 35 Covid-19 patients at National Hospital

May 12, 2021 byMihi Perera No Comments
A total of more than one million Sri Lankan citizens have been vaccinated so far, the Epidemiology Unit of the Ministry of Health said yesterday.