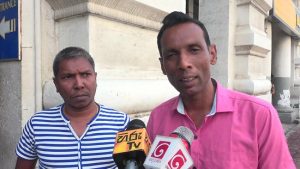 The two individuals involved in the controversial ‘White van’ press conference have been remanded until 11th March over a cash robbery incident.

The two individuals are amoung the 10 suspects who were arrested over a Rs. 4.4 million cash robbery, which had taken place on 2nd of  February in the Gampaha area.

However, only six of them were charged before the court.

The suspects were ordered to be remanded after being produced before the Gampaha Magistrate today (28).

The individuals in question were previously arrested and remanded over the controversial media conference held in the run up to the presidential election, in which they had made certain allegation pertaining to “white van” abductions.

The two suspects, Anthony Douglas Fernando and Athula Sanjeewa, were released on bail on January 06.

December 29, 2020 byNethmi Liyanapathirana No Comments
The National Medicines Regulatory Authority (NMRA) is awaiting the Government’s decision on picking countries that Covid-19 vaccinations could be imported from, to open registrations for suppliers..

February 25, 2021 byLahiru Pothmulla No Comments
The Public Health Department of the Colombo Municipality Council has made arrangement to vaccinate the residents over 60 against COVD-19 in two weeks commencing Saturday 27th, Mayor Rosy Senanayake to