Who is to benefit from “sudden” gazette notification? 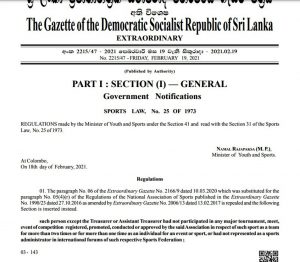 Is any individual being benefitted unduly by the 19 February 2021 Extraordinary Gazette notification 2215/47, issued by Youth and Sports Ministry?

Is any individual benefitted unduly by the 19 February 2021 Extraordinary Gazette notification 2215/47, issued by Youth and Sports Ministry?

It is all but interesting that the said notification was made, repealing a previous notification on the National Associations of Sports, just five days before nominations were called for Sri Lanka Cricket’s (SLC) Annual General Meeting (AGM), scheduled for 20 May.

“… such persons except the Treasurer or Assistant Treasurer had not participated in any major tournament, meet, event of competition registered, promoted, conducted or approved by the said Association in respect of such sport as a team for more than two times as an individual for an event of sport, or had not represented as a sports administrator in international forums of such respective Sports Federation;…”

The now-repealed paragraph No. 06 of the Extraordinary Gazette (2166/9) of 10 March 2020 issued by the Minister of Education, Sports, and Youth Affairs Dullas Alahapperuma said thus:

“… such person except the Treasurer or Assistant Treasurer had not participated as a player in any major tournament, meet or competition registered, promoted, conducted or approved by the said Association in respect of such sport as a team for more than two times or for more than one time as an individual for an event or sport, or had not represented Sri Lanka as a player and is not in possession of a certificate issued to the above effect;…”

Paving way for a certain individual?

The talk doing the rounds in the local cricket circles now is that this “sudden” gazette notification has been issued with a view to paving the way for a certain individual, whose possibility to contest for SLC executive committee in the forthcoming election is hindered by the previous Extraordinary Gazette (no. 2166/9 issued on 10 March 2020).

Is such a change of Sports Law viable in duration of time where nominations have been called for an AGM of a national sports association or more of those?

In fact the election of SLC office-bearers for 2021-23 were announced for 20 May 2021 on, reportedly, 5 February and the latest Sports Ministry Extraordinary Gazette was issued on 19 February with 24 February (Wednesday) being the day of accepting nominations.

Is the said 19 February Extraordinary Gazette indicates that one contesting camp for the SLC election is unduly favoured by the authorities?

If so, it is not providing a level playing field for the elections. It is nothing but having your own men while disrupting the way for the others.

It is further interesting that the development occurred when Sri Lanka is struggling internationally, currently being placed only seventh in both Tests and T20Is and eighth in ODIs.

At the same time on 15 March the Appeal Court of Sri Lanka is to hear responses from several parties, including SLC and the Sports Ministry, over a petition filed on 15 February by 12 members of “the civil society”, including Muttiah Muralitharan, on “the governance of cricket in Sri Lanka”.

The sixth point in their 27-item petition said: “We are aware of the difference between a ‘Government acting of its own volition’ (political intervention) and a ‘Government acting under the direction of the judiciary’ (judicial intervention). That made the difference between the suspension of Zimbabwe Cricket (ZC) and non-suspension of Board of Control for Cricket in India (BCCI) by ICC. We are very mindful of these legal issues.”

September 1, 2021 byRevatha No Comments
Yamuna Pitigala of SLC passes away