* Did the alleged fixing spill over from team selection in the actual match?

* Are the Captain and some of the players involved or not?

* Will the impregnable role-models of the game be exposed as traitors?

* Will India interfere with the investigation from state level?

* Now the ex Sport Minister’s mission over. Will the authorities try to dig deep and unravel the truth?

* The last chance to clean up the once holy sport

* Will ‘the greatest mystery’ in cricket of our time remain further a mystery? 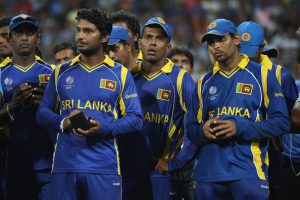 Mahindananda Aluthgamage, who was the Sri Lanka Sports Minister during 2011 on Wednesday (24) handed over his six-page report that is also consisting eight additional documents into the hands of the specially appointed officers, DIG T.G. Samaranayake and Inspector Supun Withanage, of the Special Investigative Unit (on sports-related corruption) attached to the Sri Lanka Police and the Ministry of Youth Affairs and Sports. The Unit is headed by Senior DIG Jagath Fonseka. The above Unit has been formed under the Parliamentary Act No. 24 of 2019 on alleviating wrongdoing relating to sports. 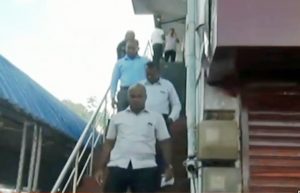 DIG T.G. Samaranayake and Inspector Supun Withanage of the Special Investigative Unit (on sports-related corruption) arrive at Nawalapitiya office of Aluthgamage on Wednesday (24)

DIG Samaranayake and Inspector Withanage met Aluthgamage yesterday at Nawalapitiya and received the latter’s report on the allegation.

“Why I decided to make this allegation now is the charge made by the ICC Anti Corruption Unit Head Alex Marshall on 23 December 2018 saying that Sri Lanka is the most corrupt country of the world of Test cricket.

I have mentioned 24 facts that are suspicious and that caused Sri Lanka to lose the (World Cup 2011) tournament. Some players had expressed their views even after I have said that players are not involved in these allegations. All parties, please assist this investigation. Don’t do politics with this. Don’t target this to the (forthcoming general) election. I request both the President and the Sports Minister to give us a report on the investigation within three months. 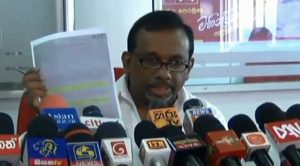 Aluthgamage addressing the media on Wednesday at Nawalapitiya in Kandy

Aluthgamage’s 24 allegations are likely to be centering on the following points:

# Were there any unusual guests meeting leading officials of the Sri Lanka team at the team hotel before the final match?

# Why the final eleven of the final was changed by the National Selection Committee comprising Aravinda De Silva (Head), Ranjith Fernando, Amal Silva, and Shabir Asgarrally

# Why did Chaminda Vaas, who was flown in from Colombo to Mumbai a day before the final not included in the team?

# Why were four surprise and eleventh-hour changes were made quite unusually in the finals?

# Were there four changes made at the breakfast table on Saturday, 2 April 2011, the very match day of the final?

# How could some last-minute surprise inclusions such as Suraj Randiv and Chamara Kapugedera were made in the Sri Lanka playing eleven?

# Was there a team decision to bat second if Sri Lanka won the toss (because of the dew factor during second innings and the fact that the Indians are good at chasing then), and eventually the decision was changed by someone the other way around?

# Why was the toss of the coin before the match done twice?

# Who was smoking over fifty cigarettes when Sri Lanka were batting?

# Who was the senior player who avoided congratulating Mahela Jayawardene upon his return to the pavilion after making his century?

# When India batted, were some of the Lankan top senior bowlers were forced by someone on the field to bowl disregarding their refusal?

# Why did the seniors of the side were evidently at arguments during the crucial stages of the Indian reply?

# Why was the evidently natural flow of the match changed immediately after the 20th or 25th over of the Indian innings?

# Who was the leading official in the player dressing room, who was fully engrossed in telephone conversations throughout the entire final?

# Do the changes and rotation of Sri Lankan bowlers during the Indian innings imply the will to restrict the batsmen and take their wickets, or otherwise?

# Was there an unusual connection between the changes of bowlers and moves taken by the Sri Lanka Captain Kumar Sangakkara and the simultaneous betting patterns of the bookie of the game?

# Why did skipper Sangakkara and the chief of selectors de Silva resigned from their posts immediately after the finals?

# Are any further evidences sought from a very senior player who played in the final and is convinced that the match was fixed? 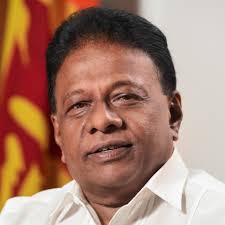 I so far don’t have any proof on any such match-fixing (of the 2011 World Cup final) so far. I found that event the ICC has not started any investigation on that, said Sports Minister Dullas Alahapperuma to a private TV channel yesterday.

“(Kumar) Sangakkara is a legend in both my world and the outside world too. And I have a presumption that there was no such thing (as match fixing). But this (allegation of Aluthgamage) is a serious one. He (Aluthgamage) may have some information on such a fixing with him. Therefore, investigating on that is our duty as the Sports Ministry,” he added.

The investigative officers will first make a report on these allegations and then that report will be sent to the Attorney General (AG). We will then take legal action after seeking the AG’s advice, the Sports Ministry Secretary K.D.S. Ruwanchandra yesterday told ‘The Morning Sports”

“I can’t say how long the investigation is going to take place because we still don’t have any understanding about the depth and the environment of these allegations,” he added.

“The investigative officials may have to inquire from certain officials of that period and look into certain situations of the time (of the 2011 World Cup). Some players too might have to be called for the inquiry depending on the contents of the allegation. But it will be a confidential inquiry.”

The most precious jewel in the Indo cricketing crown 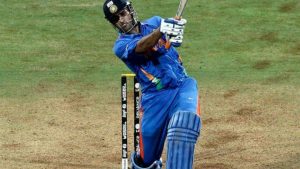 Talking on the issue at hand, an expert told on Wednesday (24) that nobody, even the Sri Lankan sport establishment or the government, can undermine the most precious gem in the Indian cricketing crown, the 2011 World Cup. How could they stomach something like their most cherished victory has been fixed?

The following are the final lines uttered by Ravi Shastri in the 2016 Neeraj Pandey biopic “M.S. Dhoni: The Untold Story”. (Sushant Singh Rajput who played Dhoni’s role in the film allegedly committed suicide at his Mumbai home last week.)

“Four runs to win. Eleven balls remaining. What a moment this is. History in the making… The nation on their feet, as are the crowd at the Whankede Stadium. The prayers begin… People on edge. Mahendra Singh Dhoni on strike. (Kulasekara bowls and Dhoni strikes that famous six over mid-on.) Dhoni finishes off in style. A magnificent strike … India lift the World Cup after 28 years.”

October 12, 2018 byRevatha No Comments
Pakistan couldn't make it in the first Test. Australia salvage a draw.