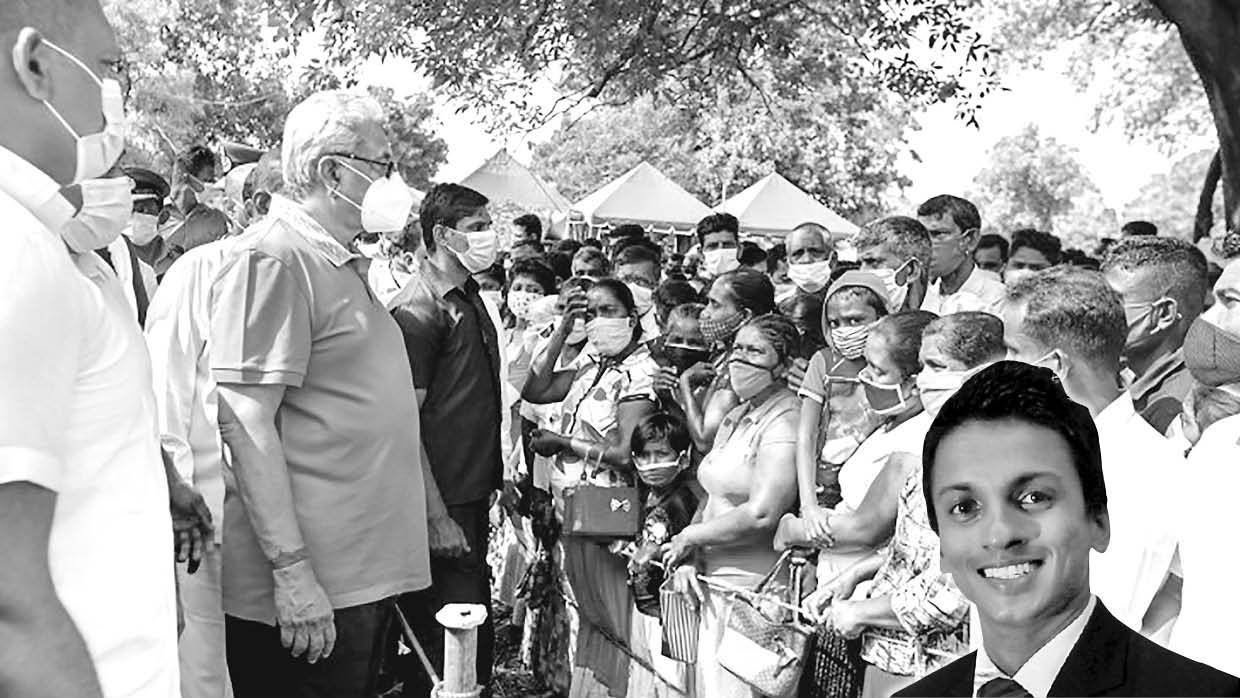 Why is the President being ‘landed’ with this request?

The “Gama Samaga Pilisadarak” is the President’s most recent engagement programme. Positives and negatives of the programme have both been openly discussed on mainstream and social media. As per media reports, the programme is structured in such a way that officials of key ministries, such as Land, Education, and Road Development, visit villages with the President.

People are then requested to put forward their problems before this entourage of officials. They try to solve the problems at the location itself, directing the state officials to act faster. The President mentioned that following such a course of action has helped build local infrastructure and helps him understand people’s problems better.

On the contrary, on social media, views have been expressed on forest destruction concerning areas where the President has been visiting, and describing this as an attempt to prioritise development at the expense of our green cover.

The objective of today’s column is not to provide a commentary on “Gama Samaga Pilisadarak”, but an effort to put things into perspective regarding the most common concerns people have been putting before Sri Lanka’s First Citizen. Secondly, we aim to explore why the very same issues are being repeated in most of the villages. In my understanding, the problems presented to the President are just symptoms of a bigger problem, and it looks like the solutions instantly provided by the officials are just temporary solutions without understanding the problem at its root.

Most frequent requests made to the President, as have been telecast in the news, are requests for land to conduct agricultural activities. The fundamental question is why solving issues surrounding land has become a common-priority request, as we saw on television, with people screaming and pleading the President to get their land matters solved.

As indicated multiple times in this column, about 80% of Sri Lanka’s land is owned by the Government. Out of that, about 30% is our forest cover. As a tiny island, land is obviously a limited resource in economic terms. Therefore, if we fail to optimise the utilisation of land, all the natural beauty and biodiversity we brag about is most likely to fade away from us.

Creating land, like what we did with the Port City, is extremely expensive and environmentally costly. The problem lies in the fact that most of the land our farmers cutivate is only under a licence, and they do not have a title. As a result, the farmer has to visit the Divisional Secretariat to obtain a license, renew the license, or even to obtain approval to change the crop they cultivate.

Most of these lands our farmers cultivate are provided under different land and agricultural projects. Over generations when the original land is divided among family members, the land plot becomes smaller and smaller.

For example, look at what happens when the original land of five acres is provided to a farmer, which in turn is divided among his four children. This will get subdivided after the next generation. Now, instead of five acres, only about 25 perches of land will now be available, and this has limited scope for agriculture. As a result of these smaller land plots over generations, industrialisation or commercialisation of cultivating lands is unfeasible.

Employing technology and machinery to increase productivity on a 25-perch land plot is not feasible. As a result, people ask for more lands from the Government, or encroach on forest cover to do their farming.

On the other hand, these lands do not have titles. So farmers are unable to optimise the maximum usage of the land using technology, because they have no source for capital. They don’t have other assets to use as collateral to access finance, nor are the banks willing to provide them loans without any valid collateral.

As a result, the land problem has become a vicious cycle. These circumstances have led to a scenario where a combination of factors continue to make our farmers poorer and our agriculture unproductive, while trapping our farmers in informal loans and creating severe social concerns such as suicide. There is the additional issue of contributing to the loss of our forest cover and destroying our biodiversity.

If we look at countries that are in deep poverty, one of the common denominators is that the people of those countries do not have their land and property rights. There is no magical formula for an economy to take off without establishing property rights for their citizens.

The President expressed his displeasure at rumours circulating on social media on the destruction of forest cover, but until we provide a permanent solution to this problem, we will lose out on every front. The President will have to hear the same complaint at every location he visits.

On top of that, the Government has decided to stop all agricultural imports for the next four years, as per reports by The Morning. This will most likely worsen the situation. Food prices will go up, and more farmers will attempt to do agriculture by practicing their unproductive farming methods.

The rising prices will punish all our poor consumers already suffering from the high cost of living. At the same time, our tourism will suffer, as it needs some imported agricultural products to prepare the cuisine. However, it is understandable that balancing such a dilemma when foreign reserves are depleting is going to be a serious challenge.

What is the solution?

The President has a greater opportunity to capitalise on this matter economically as well as politically. We have to have a digital system and a digital land registry. As soon as the “digital land registry” is spelled out, many associate it to the three-letter “MCC” agreement. That is now gone, and there is very little value in debating it now.

But over the next four years, the President can prioritise the digital land registry, which will mark forest cover on the cadastral survey system with GPS coordinates. It will increase Government efficiency drastically, release the dead capital of land among farmers, and investments will start kicking off. Most of the back-end work has been done, and cases for the need for a digital land registry have been developed.

The question is: how are we going to find money to implement the survey and purchase the technology? We have to seek out multilateral donor agencies, or a potential bilateral loan, to secure the funding, as this will create massive economic potential. Setting up a digital land registry will be significantly impactful, rather than just developing a road or incurring another massive capital expenditure.

This is an action which will move us upwards in the Ease of Doing Business Index, and build investor confidence. At the same time this will fall perfectly in line with the President’s manifesto of “Vistas of Prosperity and Splendor” under a digitised economy.

The ripple effect will trickle down to smaller cases at courthouses, as well as to micro and small business enterprises when the project unfolds.

Since there have already been many land deed programmes such as “Jayabhoomi” and “Swarnabhoomi”, this will not be a simple and easy project. Having the simple digital infrastructure ready is the first step to address these issues, both at present and in the long term.

The main opposition comes from lawyers, as they are the main beneficiaries of delayed court proceedings. If the President focuses on this single reform, it will not only be the best-ever environmental conservation reform to protect our green cover, but also a historic economic reform to unlock our dead capital, and reactivate capital markets and agriculture. Most importantly, it will be a big relief for our farmers and fellow Sri Lankans.

June 25, 2021 byNews Admin No Comments
Sri Lanka Retailers’ Association (SLRA) informed that some industries have managed to survive during the current wave and to increase sales, although overall retail sales have decreased significantly

Surcharge Tax Bill to be submitted to Parliament

February 2, 2022 byNews Admin No Comments
The Surcharge Tax Bill is to be submitted to the Parliament for approval following the approval of the Cabinet of Ministers on Monday (31 January).