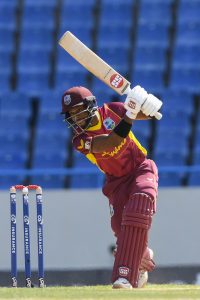 West Indies opener Shai Hope scored his tenth ODI hundred and was adjudged the Player of the Match. Here is driving one on the off on Wednesday (11)

West Indies beat Sri Lanka by eight wickets on Friday (10) (Thursday morning Sri Lanka time) in their first ODI in Antigua to take a 1-0 lead in the three-match series.

Sri Lanka, opting to bat first after winning the toss, were bowled out in 49 overs for 232 runs. Yet they enjoyed a solid start with openers Danushka Gunathilaka (55) and Skipper Dimuth Karunaratne (52) both making half-centuries while sharing 105 runs for the first wicket in 19.2 overs.

Ashen Bandara then gave Sri Lanka some consolidation to an otherwise crumbling middle-order batting display . Bandara scored 50 runs to become only the fifth Sri Lanka batsman to make a half-century on debut. Pathum Nissanka also won Sri Lanka ODI colours also on Wednesday but was run out for eight.

The second and third ODIs of the series will be held tomorrow (12) and on Sunday (14) at the same venue, Sri Vivian Richards Stadium at North Sound, Antigua, with both games starting at 7 p.m. Sri Lanka time.

Simona Halep knocked out by Kaia Kanepi in first round

August 28, 2018 byMalik No Comments
World number one Simona Halep became the first top-seeded woman to lose in the US Open first round, falling to a 6-2 6-4 defeat against Kaia Kanepi.