The SLC, in a media communique, said on Friday: “There were few media reports published in the recent days, stating that Sri Lanka Cricket’s Head Coach Chandika Hathurusingha has applied for the position of  ‘Head Coach’ of the West Indies Cricket Board. However, Mr. Hathurusingha has informed SLC that he has not applied for such a position and will continue to remain with Sri Lanka Cricket.”

An India-based cricket website reported on 27 November 2018 that the high-profile coach, who joined Sri Lanka in December 2017 following a highly successful stint with the Bangladeshi national team, has been short-listed for the Windies job along with former West Indies fast bowler Courtney Walsh and Sussex player Chris Adams. 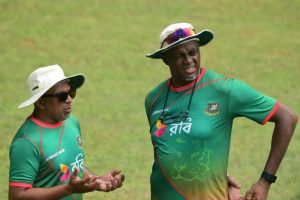 Currently Hathurusingha is in the middle of his two-year contract with SLC which will cover the forthcoming ICC World Cup, starting next May in England.

Former Windies players Roger Harper and Gus Logie have refused to take up the job, the said report also added.

Following are extracts from the said web article:

According to sources, Hathurusingha secretly applied for the post few weeks ago and the West Indies Cricket Board has already short listed him along with few other candidates.

“Yes, Mr. Hathurusingha has been short listed for the job along with Mr. Walsh and Mr. Adams. But it is too early to say anything, as we haven’t discussed things with him face to face. We are considering Walshy as well, but he has certain conditions,” a top official of West Indies Cricket Board told Cricket Age.

Currently, Hathurusingha is in the middle of his two years contract with SLC. However, his tenure so far has been marred with poor performance of the national team and off field controversies. Since taking over the team in December 2017, Hathurusingha has turned out a white elephant for Sri Lanka cricket. Despite enjoying 6 million salary per month, Sri Lanka slipped significantly in world cricket, with embarrassing defeats against lower ranked teams like Afghanistan and Bangladesh. Sri Lanka were knocked out from the Nidhahas Trophy at home and Asia Cup. Recently, Sri Lanka have lost all three series against England despite being the host.

However, more than poor showing of Sri Lanka team on field, it is the off field controversies surrounding Hathurusingha, that completely ruined his credentials. In Bangladesh he was just a coach, but in Sri Lanka, he took over everything under his control from a weakened and depleted SLC.

From the beginning, he sidelined every single domestic coach of Sri Lanka and filled national team with his close associates. Moreover, he became that much powerful that he also started to decide the airlines of the national team!

However, according to sources, there is a strong possibility that he will took over West Indies job, as its culture suits Hathurusingha.

In June this year, Sri Lanka head coach Chandika Hathurasingha had a brief stay in West Indies. Sri Lanka Cricket Board (SLC) need to find out the real reason of his stay. Or SLC itself already knows it?

The incident happened after the conclusion of Sri Lanka’s West Indies tour, where they played three match test series. Even though Sri Lanka managed to draw the series 1-1, it had turned out a disastrous tour, largely due to ball tampering controversy during the second test.

After the conclusion of the series, Sri Lanka media was waiting for team’s arrival with barrage of questions. However, when team arrived, Hathurusingha was not with the squad. He was in West Indies. At that particular time itself, Cricket Age was the only one to publish the story of Hathurusingha’s mysterious stay in West Indies.

Now, five months later, when it has emerged that Hathurusingha has been short listed for West Indies head coach job (according to highly placed sources at West Indies Cricket Board), the incident that happened in June looks mysterious.

September 16, 2021 byRevatha No Comments
The full media release by SLC is here

January 8, 2021 byRusiru Keppetipola No Comments
Sri Lanka’s cricket depends on Sri Lanka Cricket (SLC). SLC is always hot and, at the onset of this new year, is becoming hotter.

Suspect arrested over grenade at church linked to two other incidents