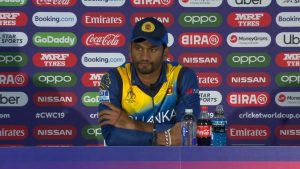 Sri Lanka’s team management failed to fulfill their media commitments not sending any team representative to the media briefing at the Kennington Oval media room following their game against Australia on Saturday (15 June) thus violating the team’s contract with the ICC, it is reported.

The ICC, though, will first write to Sri Lanka Cricket (SLC) regarding the matter to ensure there’s no repeat of the incident.

It was also reported earlier that dozens of SLC officials are now in England, amid these sour developments, watching cricket in the cold climes of London and the surrounding areas.

SLC released the following media communique on the issue:

Sri Lanka Cricket wishes to announce that, contrary to various media reports, there won’t be any sanctions imposed on the Sri Lanka team by the ICC, over its non-participation in the post-match media conference on Saturday (15th June, 2019) following the World Cup game played against Australia.

Sri Lanka Cricket discussed the ‘Saturday’s Incident’ with the ICC and assured that a similar situation will not occur going forward in the tournament.

The SLC also advised the team management to comply with the obligations, a participating team has to adhere during the ICC Cricket World Cup.

The live audio commentary, conducted in Sinhala, commenced with the Sri Lanka vs Australia match played on the 15th June, 2019 and will continue covering all matches including the semi-finals and the final.