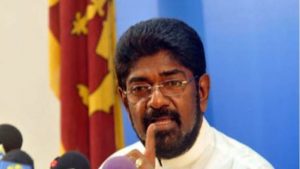 Mass Media Minister Keheliya Rambukwella said today that the Animal Welfare Bill will be tabled in Parliament as soon as possible.

Rambukwella said that there was a lengthy discussion on this issue during the discussion at the Cabinet meeting yesterday (18).

He said discussions were held to update old Acts and that several Ministers had expressed their views on the matter and hoped to bring the Bill to Parliament as soon as possible.

The Minister said that there is a current fine of Rs. 100 for any cruelty to animals and that it should be changed immediately.

He said the government will deal sympathetically when it comes to the rights of animals and discuss it as a very sensitive issue.

The Minister expressed these views at the Cabinet media briefing held at the Government Information Department today (19).

April 8, 2020 byTSM Web Desk No Comments
The The Office on Missing Persons (OMP) has urged the government to include  families of the missing and disappeared in any proposed relief measures, including the provision of food and financial assi