Williamson ruled out of England T20Is with hip injury 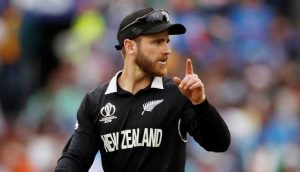 Kane Williamson, the New Zealand captain, has been ruled out of the five-match Twenty20 international series against England with a hip injury. Right-arm pacer Tim Southee will lead the side in his absence.

Williamson’s hip has troubled him for some time now – it made him pull out midway through the Test series against Bangladesh in March. While he recently represented Northern Districts against Canterbury in the Plunket Shield, after discussions with head coach Gary Stead, it was decided that rest would be ideal at the moment.

“We’ve been monitoring the injury for a while now, and it’s the same issue that ruled him out of the final Test against Bangladesh back in March,” Stead on Friday, 25 October. “It’s disappointing timing for Kane, at the start of an exciting Kiwi summer, but we feel it’s the right decision, with a busy season ahead.

“We’re fortunate to have someone experienced like Tim who can comfortably step in and take the reins, as he successfully did on the recent tour of Sri Lanka.”

Meanwhile, fast bowler Lockie Ferguson is set for a comeback, after a thumb injury ruled him out of New Zealand’s entire tour of Sri Lanka. The 28-year-old last played in the ICC Men’s Cricket World Cup 2019 final against England, and will now take on the same opposition for a New Zealand XI in two warm-up games. He will also be available for the first three games of the T20Is series, before making way for Trent Boult in the last two fixtures.

Boult, New Zealand’s highest-ranked player in the MRF Tyres ICC Test Rankings for bowling, will prepare for the upcoming Test series against England initially. With World Test Championship points in the balance, New Zealand will hope to have their best players available and ready for a big summer of Tests, featuring series against England, Australia and India over the next four months.

With that in mind, Boult will play one more game in the Plunket Shield, New Zealand’s domestic first-class competition, before joining the national squad for the T20I series.

“In working with Trent and looking at the season ahead,” Stead said, “we feel another four-day game will provide him with the best preparation for the upcoming Test series against England and Australia.” ICC