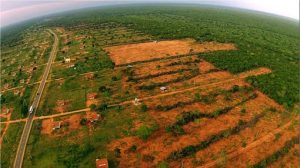 Bathiudeen was accused of being directly involved in the deforestation in Wilpattu to resettle displaced Muslims.
In Parliament last week, Janatha Vimukthi Peramuna (JVP) Leader Anura Kumara Dissanayake raised the issue of Wilpattu forest reserve lands being cleared on the orders of Bathiudeen.

“In 2012, former President Mahinda Rajapaksa’s Government opted to provide lands to the families who had lost their homes due to the war. Soldiers and officials of the tri-forces did not have families to go back to or villages to live in. The Government replaced them, but none of these families were resettled inside the Wilpattu National Conservation forest.

“Those lands were also not carelessly just distributed among the civilians. The Government conducted proper investigations and looked into property deeds and other documents prior to distributing land,” said Bathuideen.

“After the new Government came into power under President Maithripala Sirisena, no land was given to any individual and we have certainly not cut down any trees in Wilpattu whatsoever.”

“Nothing happened recently. This was all a political hoax to make the Government look evil in the eyes of the public and this was an attempt to assassinate my political character,” said Bathiudeen.

“I told Parliament and urged the Speaker to appoint a committee and make an inquiry into this matter,” he stated.
He then challenged the committee to prove that he had provided settlement or cut down trees within the forest, and if he had, may he be given the necessary punishments by law.

Willpattu resides between the Anuradhapura and Puttalam Districts.

“The displaced citizens were from Mannar and were to be resettled back in Mannar,” said the Minister.

“They’re harping on one image that was allegedly taken inside the Wilpattu forest. These are all false allegations to tarnish me in the eyes of the public,” he reiterated.

According to Bathiudeen, the reason for the sudden interest in the Wilpattu National Park was caused by his questioning of a project situated in Aruwakkalu, which has been allocated Rs. 7,900 million and is said to span across 170 km.

The Minister questioned why the civilians in the surrounding area had not been given proper notice or even an explanation regarding this matter.

He stated that the Minister had been purposely asking the court to postpone the court date for his case so the Minister would allegedly have enough time to destroy evidence and take care of the matter. “The court date was postponed to 10 June and I will not allow them to delay proceedings any longer,” said Kodituwakku.

He had filed paperwork amounting to 800 pages, had produced overwhelming satellite evidence, and had shown that the Wilpattu Reserve appeared to be a thick layer of forest up until 2011. However, Bathiudeen insisted that the Muslim community had inhabited that land since 1991.

“They were forced to leave this stretch of land due to the terrorist attacks in the North,” Kodituwakku explained.

“It was evident that the Minister’s statement was an utter lie,” he accused the Minister.

The court is scheduled to take up the case again on 10 June.

“It is the constitutional duty of every citizen in this country to protect the environment. A gazetted reserve forest cannot be touched by any individual – it is a criminal offence. President Sirisena said that in another 15 years’ time, Sri Lanka will not have any forest cover. If he was aware of this situation, why did the President not remove Minister Bathiudeen?” he questioned further.

“What the President should do is conduct a criminal investigation and ask for the immediate arrest of Bathiudeen. If our country was governed by fair and just leaders, situations such as these can be completely avoided,” he said.

In light of these events, former Environment Minister Anura Priyadarshana Yapa spoke to The Sunday Morning, explaining that once the Muslim community in Mannar was displaced, they were resettled in the Puttalam District.

When the war was over, the community wanted to resettle into their old villages in Mannar, which they left 30 years prior. Then arose the issue of demarcating their land.

This was when the Minister held the Environment Ministry and the Forest Department came under it. At the time, when the former Minister inquired into the matter, most of the virgin forests in Mannar, Mullaitivu, Vavuniya, and Puttalam Districts were also classified as “government forests” and managed by the Forest Department.

Yapa then predicted that there would be a demand for forest land from when the war ceased. The only available land the Government owned and could distribute among the people were forests.

The Forest Department had with them the maps demarcating the areas of these forests, and the former Minister gazetted these forests as reserves under the department in Parliament.

“This was a necessity and it is the duty of the Government to resettle its civilians. Thus, I told Minister Bathiudeen to provide me the necessary information to de-gazette the land which was needed by his people,” he said.

However, before that could be done, Yapa’s ministerial position changed and he was assigned the Minister of Disaster Management, after which, he has no knowledge regarding the matter.

A taskforce was appointed by former President Mahinda Rajapaksa to look into this matter.

Yapa confirmed that there was a necessity for land for the civilians; however, he stated that his personal contention was that these forests should be demarcated and reserved for future generations.

Following this, leading environmentalist Nayanaka Ranwella told The Sunday Morning that land belonging to the Forest Department, which resides north of the Wilpattu forest, was destroyed over 10 years ago. “It all started in 2010 and then continued,” he stated.

“Environmentalists and other nature-lovers have been trying to bring this matter into the limelight by publishing reports on various platforms and the media. We met with President Maithripala Sirisena as well, whose Government was also tarnished as the cutting of trees did not stop.

“However, recently, there has been an end to this travesty. Yet, no individual or official has taken accountability, and justice has not been served,” said Ranwella.

There has reportedly been no re-acquiring of land that was lost due to the alleged destruction of the forest.

The second issue lies in resettlement, as human inhabitation poses a threat to nature. “The resettlement had been done on land declared as forest land,” he confirmed.

Lately, the media hype about this issue has resulted in content relating to this issue trending on social media, under tags like “Protect Wilpattu”.

Ranwella also said that no issues of destruction were found recently and that they were still looking into what exactly had been discovered.
He reported that, as of last Wednesday, no new destruction has been caused. He confirmed that this was the same incident that had been happening in 2010.

There have been three court cases filed regarding the Wilpattu Forest Reserve; one with the Centre for Environmental Justice and another against the road that was built within the Wilpattu forest.

November 16, 2021 byNews Admin No Comments
A woman from Pudukkottai District yesterday (16) moved the Madurai Bench of the Madras High Court seeking conduct of re-postmortem on the body of her husband, who died after falling into the sea when

A matter of appeasement

September 18, 2021 byNews Admin No Comments
To put it mildly, the metamorphosis from the sublime to the ridiculous in the all-important matter of governance in the past couple of years has been nothing short of spectacular. It has now come to a