November 24, 2021 by Ruwani Fonseka No Comments

State Minister Kanchana Wijesekera backed his statement made in Parliament today (24) which detailed that the Yahapalanaya Government was informed by former State Intelligence Service (SIS) Chief Nilantha Jayawardhane to arrest Zahran Hashim 11 months before the Easter Sunday attacks, by revealing the excerpts of the document presented by Jayawadhane to the Yahapalanaya Government on social media.

The State Minister said the former SIS Chief had informed the former Minister of Law and Order, Public Administration and Management Ranjith Madduma Bandara, who is the current General Secretary of the Samagi Jana Balawegaya (SJB) party, in this regard.

“The SIS Chief had informed Madduma Bandara of the impending threats posed by Zahran and had requested for the arrest well before the attacks were due. So I do not understand why the opposition is now trying to pass the Easter attacks on the current Government” stated Wijesekera. 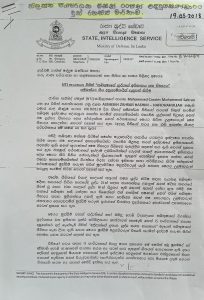 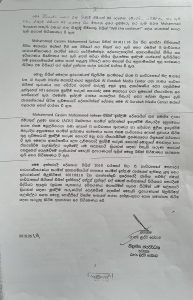 November 20, 2020 byNethmi Liyanapathirana No Comments
Colombo Mayoress Rosy Senanayake yesterday (19) stated at a media gathering that a decision has been taken to provide Rs. 3,000 worth of dry food to 70,000 families within Colombo.

No power disconnection in isolated areas if bills not paid: Minister

December 6, 2020 byLahiru Pothmulla No Comments
Minister of Power Dullas Alahapperuma said today that there would be no power disconnections at houses in the isolated areas if the electricity bills were not paid.