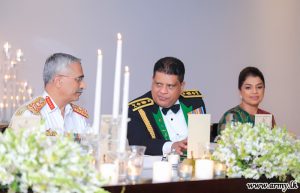 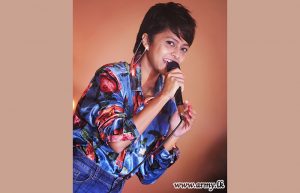 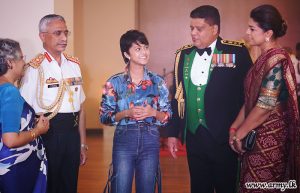 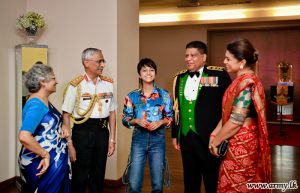 At a formal banquet hosted on Friday (15) at the Army Headquarters in felicitation of the Chief of the Army Staff (COAS) of the Indian Army General Manoj Mukund Naravane, singing sensation Yohani made an appearance and entertained guests with her talent.

A statement from Sri Lanka Army notes that, “Ms Yohani De Silva who elevated Sri Lanka’s singing industry to unbelievable heights made an entry into the distinguished gathering headed by the Indian COAS. India in the past few days honoured this young artist in a remarkable manner by hosting her in a number of entertainments. Ms Yohani De Silva is the daughter of one of the best former Sri Lanka Light Infantry Warriors Major General Prasanna Silva (Rtd).”

The banquet graced by Mrs Veena Naravane, the spouse of the visiting Indian Army Chief, Senior Officers of the Indian Army and a host of distinguished officers saw its culmination with exchange of mementoes.

February 13, 2021 byLahiru Pothmulla No Comments
Foreign Minister Dinesh Gunawardana and the Russian Ambassador in Sri Lanka have discussed issues relevant to the two countries including regional cooperation and engagement in multilateral fora, the

January 22, 2021 byLahiru Pothmulla No Comments
The first group of tourists from Germany and Switzerland left to Sri Lanka yesterday from Frankfurt, Germany on board Sri Lankan Airlines’ direct flight to Colombo, the Embassy of Sri Lanka in Germany