November 2, 2021 by Venessa Anthony No Comments

The British Council hosted a two-day “Youth in Climate Action Virtual Conference” on 28 and 29 October as a run-up to COP26 hosted in the UK in November. 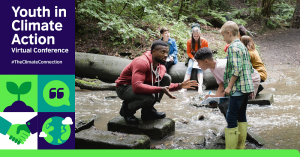 Under the larger theme of “The Climate Connection”, the Youth in Climate Action conference aimed to bring young people and relevant stakeholders to hold discussions around thematic areas related to climate change. The conference focused on topics such as policy engagement and public awareness on climate action, showcasing youth engagement and advocacy while providing a platform and agency for youth and stakeholders to build a conversation and commitment to address climate issues.

The event largely contributed to setting up dialogue and conversations that will lead to recommendations and ideas for the future, celebrate the success of youth leaders working on reducing climate change impact, and discuss research evidence on how young people can effectively contribute to climate action priorities set out by the Governments of Sri Lanka and the UK, and COP26.

Starting off the first day of the conference, British Council Sri Lanka Country Director Maarya Rehman gave the audience an introduction to COP26 and The Climate Connection campaign. She explained that, with the impact of Covid-19, a majority of young people from their respective communities had been severely affected and become more vulnerable. “A lack of knowledge and awareness, a lack of meaningful education, and an urgent need for procreation for an effective solution to climate change is what we hope to highlight in the main discussion,” she stated.

Day one featured panellists Ministry of Environment Additional Secretary (Policy) Wasantha Dissanayake, Ministry of Youth and Sports Additional Secretary (Youth) Saman Waduge, University of Colombo Department of Zoology and Environment Sciences Professor Erandathie Lokupitiya, Sustainability2040.org Convener and British Council International Climate Champion Mohamed Husni, and UNDP Sri Lanka Co-ordination and Partnerships Associate Kulunu Thamara Jayamanne, who spoke on youth inclusion in the climate agenda in Sri Lanka. According to Rehman, the main goal of day one was to publicise high level report finding and raise awareness of the current climate crisis that is looming over us.

Day two spoke about four big ideas to change the climate condition, featuring four youths Nivetha Sivarajah, Mohamed Nasreen, Janith Ittapana, and Nuzrath Farook, who brought forth their ideas and encouraged others to join hands with them to make a difference in the world.

Minister of Regional Co-operation Tharaka Balasuriya delivered the final keynote on behalf of the Minister of Youth and Sports. In the keynote, he stated that climate change is no longer a looming threat; it is real and its devastating impacts are being felt the world over. “Increasing in its intensity over the years, climate change has evolved into an existential threat to many, causing significant damage to life, property, livelihoods, and national economies. It has given rise to new challenges such as climate refugees, and rendered our future uncertain,” he observed.

The conference also came to agreement that climate change will result in new jobs being created and existing jobs to be adapted to suit changing climates, which have an impact on communities and ecosystems. For example, some youth may no longer be able to engage in traditional livelihoods that their parents practiced, such as those relating to agriculture or fisheries, impacted as they may be by climate change.

Going into more detail on the topic, Balasuriya shared: “As such, new jobs, such as those relating to information technology and other avenues, such as the creative economy, hold vast potential for young people. My State Ministry is currently focusing on these new opportunities of employment that are arising for young people, such as those relating to e-commerce or creative economic activities, that are not impacted by issues such as climate change.”

The outlook for the world is not promising. Balasuriya further added that in December last year, the UN Secretary General urged countries to declare a “climate emergency”, and that at present, over 35 countries have responded to this call. The recent report by the Intergovernmental Panel on Climate Change, declaring that we are likely to reach the threshold of 1.5˚C increase in global temperatures by the early 2030s and exceed 2˚C this century, is a strong warning for all of us. “Unless we adopt stringent measures to limit global emissions, we place entire humanity at risk, especially the generations that will follow after us,” he stated.

Concluding, he commented that he strongly believes Sri Lanka’s youth have the ability to create innovative and creative solutions to address the impacts of climate change, and that we could showcase to the world, adding: “To do that, they need our support and encouragement. It is why initiatives such as this virtual conference are so important for today’s youth.”

‘Things will be more flexible in 2021’: Piyush Tyagi of Marriott International

January 31, 2021 byNews Admin No Comments
Weligama Bay Marriott Resort & Spa is a beach resort with a local touch in terms of cuisines and offerings. During the pandemic, Marriott had to close their doors for about two-and-a-half months..

Honouring International Day of the Victims of Enforced Disappearances

September 1, 2021 byNews Admin No Comments
The International Day of the Victims of Enforced Disappearances is held on 30 August in order to recognise the courage, commitment, and determination of families and victims from all communities, who,