Yupun – Third among the best

Yupun talks to ‘The Morning Sports’ after grand feat

I am really happy to compete today (on Tuesday) with world’s best runners at present. They are really good sprinters.

Other than the Italian competitor (Freider Fornasar who finished at 10.61), each and every one of the others is a champion. 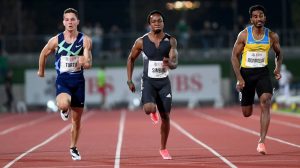 Mudiyanselage Yupun Abeykoon of Sri Lanka has brought credit to his motherland for a second time in eight days.

On Tuesday (15) in Switzerland, he ran his pet 100 metres sprint event in 10.24 seconds to win third place. That was at ‘the 2020 Gala dei Castelli’ which is a World Athletics Bronze Level Series meet held at Stadio Comunale Bellinzona, Bellinzona, Switzerland.

Yupun’s timing was one-tenth of a second slower than that of his South Asian record-breaking run (10.16 seconds) made last Tuesday (8) at ‘the Anhalt 2020 competition’ held in Paul Greifzu Stadium, Dessau, Germany. But what he ran yesterday was a more competitive race that featured priced sprinters of world stage at present.

Among the leading participants this Tuesday were Akani Simbine of South Africa who is the defending champion of Commonwealth Games. He won first place at 10.02 seconds. Then there was World Junior Silver Medallist Filippo Tortu from Italy who clocked 10.07 seconds to become second on Tuesday.

Notably, the 2012 London Summer Olympics 100m finalist Churandy Martina of Netherlands also took part in the event on Tuesday. He finished sixth with a time of 10.54 seconds. In 2012 London semi-finals where Martina improved his personal best to run at 9.91, Justin Gatlin ran a 9.82. In the final, Martina placed sixth, behind Usain Bolt, posting a 9.94.

Reports from Switzerland revealed the biggest focus before the race was on Simbine, Tortu, and Abeykoon. The three ran ‘together’ close to each other and they were almost together up until 50 metres of the race.

It is reportedly for the first time that a Sri Lanka athlete has run alongside top contemporary European and African sprinters and placed among top three after the decade of 1990.

October 30, 2019 byRevatha No Comments
Australia win series 2-0 with one match to go

April 30, 2021 byRevatha No Comments
In social media debates, the Indian cricket board has been accused of being ‘tone-deaf’ as it continues with the tournament amid a national health crisis